Marc Benioff, Co-CEO of SalesForce speaking at the WEF in Davos, Switzerland on Jan. 22, 2019.

Salesforce shares bounced around in extended trading on Tuesday after the cloud software company reported better-than-expected results. The stock initially rose about 1% and then fell 2%.

Here are the key numbers of the fiscal third quarter:

For the full fiscal year, Salesforce now expects revenue of $16.99 billion to $17 billion, compared with the $16.9 billion average analyst estimate, according to Refinitiv. At last month’s Dreamforce conference, Chief Financial Officer Mark Hawkins said Salesforce will double in size by fiscal 2024, reaching revenue that year of $34 billion to $35 billion.

Salesforce continues to generate growth in its homegrown Sales Cloud business, which provides customer relationship management tools to salespeople. Revenue in that unit increased 15% to $1.17 billion. But with its core business maturing, Salesforce is turning to acquisitions as it seeks to expand into new markets.

In August, Salesforce completed the $15.3 billion purchase of data analytics company Tableau, its biggest deal ever. That came just over a year after the $6.5 billion acquisition of MuleSoft, whose software connects data that’s stored in different silos. Also this year, Salesforce spent $1.35 billion on ClickSoftware, which provides software to field service management workers.

Marc Benioff, Salesforce’s co-founder and co-CEO, said at Dreamforce that balancing organic and inorganic growth is “a dance.”

“It’s the pacing,” Benioff said. “You have to acquire, then you have to ingest it. It takes a while to bring these things in, to integrate them, to get the momentum, to get the velocity.”

He pointed to MuleSoft as a deal where there were a lot of questions, but now people get it. That integration process has just started with Tableau. “We’re just kind of get 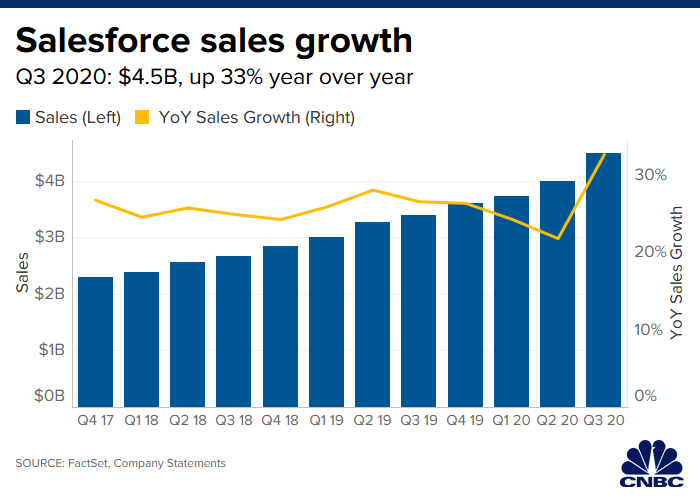 ting who are you, what’s your name, because I’m Marc, nice to meet you,” he said.

Salesforce shares have climbed 18% this year, but they’ve underperformed the S&P 500, which has gained 23%, and have returned far less than smaller cloud companies such as ServiceNow, Shopify and Veeva.

World’s economic growth could be worst since financial crisis, Bank of America says